After many months of hand sewing and many pricked fingertips I present my reconstruction of the Filmer Bodies c. 1630-50 from Manchester Galleries. 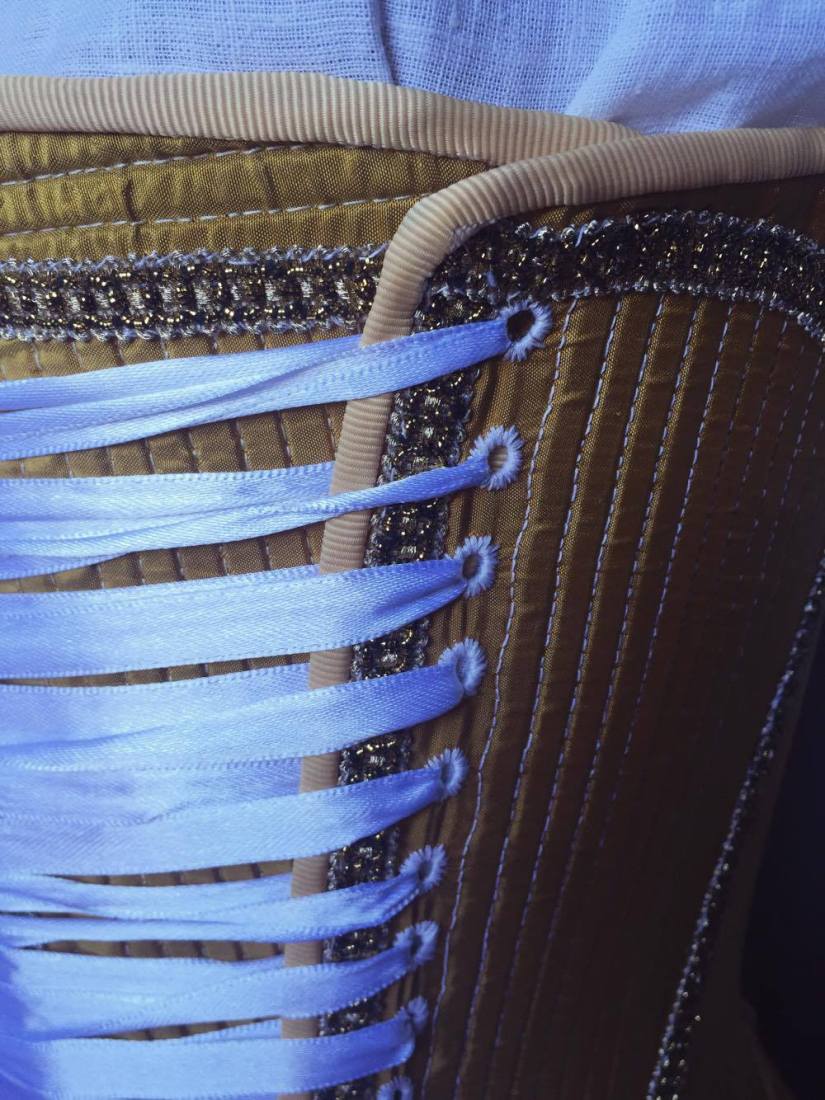 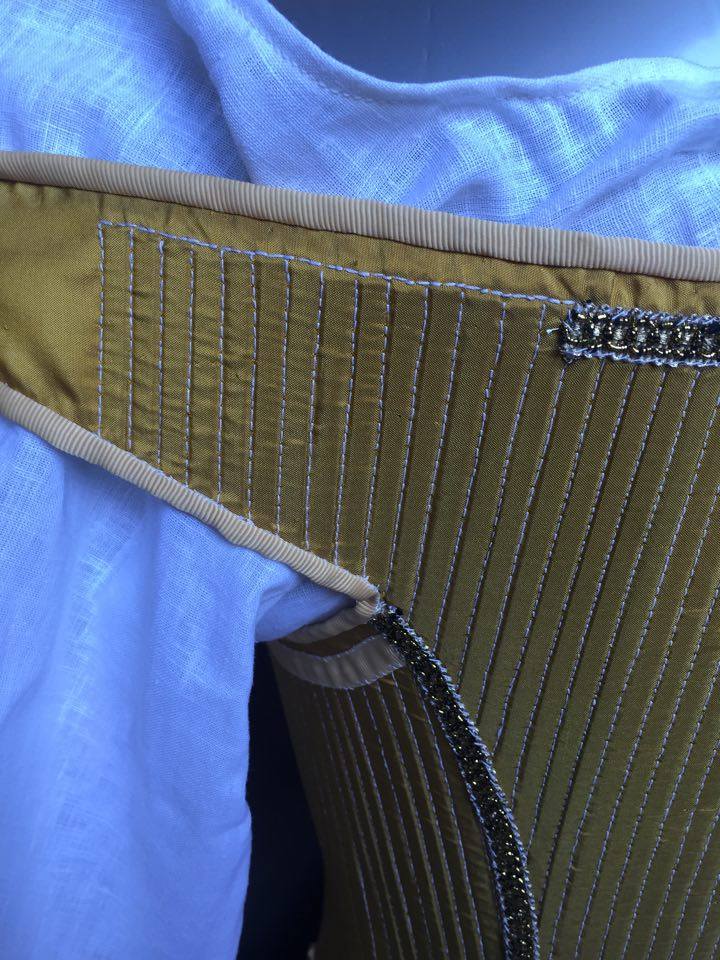 As I was working completely from pictures, a few measurements and curatorial notes when reconstructing these bodies it was only after completing them that I realised that there were a couple of things I got wrong.

The first is that I did not do the boning channels 100% accurately. Although my boning channels run vertically to the centre front of the bodies, after reanalysing pictures of the bodies I can see that the boning is slightly slanted away from the centre-front at the top, like the effigy bodies. This would have been to allow for the bust and could slightly change the way that my reconstruction fits around the bust area, making it less accommodating of larger busts.

Secondly, I also realise that I did not cut the slits between the back tabs high enough. In my original pattern I actually had them much higher, as they should be, however, I wasn’t sure if it was going to be too high so I lowered the slits a bit. Turns out I had it right to begin with! Again this means that the fit of the bodies might be slightly altered, as it makes the waistline lower.

One thing I cannot work out are the shoulder straps. These straps are designed to sit off the shoulder in accordance with mid-seventeenth century fashions. However, the straps on my reconstruciton are very short, even though I checked my measurements and calculations multiple times before I cut out my fabric. Either the original owner had very narrow shoulders or there is meant to be a length of ribbon holding them together. Then again, my blow up mannequin off eBay doesn’t have the best proportions so once I try these on a model hopefully I can work this out more.

Overall though I’m extremely happy with how the bodies turned out and I can’t wait for my models to try them on!

After completing the stomacher I proceeded to cut out the three (or, really, six – lining and outer fabric) pattern pieces to complete the bodies. This consisted of two front pieces and one back piece, with extra seam allowance given on the side seams. As with the Effigy bodies I attached both layers of each pieces together by overhanding the silk and linen together, right sides facing each other (so inside out), from the wrong side, and then pulled them right sides out so that the raw edges were on the inside.

I then proceeded to back stitch the boning channels. This is the second time I have done this now and it is by far the most time consuming part of the construction process. The widths of the boning channels in the original are incredibly tiny and much smaller than any of the modern plastic ‘whalebone’ I could find. So each boning channel is 6mm wide to accommodate this 5mm boning.

After the boning channels were complete I then attached the pieces of the bodies to each other at the side seams. On the effigy bodies the side seams were stitched together from the wrong side so that the seam was on the inside of the bodies when worn. However, the Filmer bodies were whip stitched together from the right side so that the seam was facing outwards.[1] This seam was then covered by the decorative metal braid trim.

After placing the boning into all the channels, I backstitched over the tops of them to keep the boning inside and finished adding all the metal braid trim and some grosgrain ribbon.

The centre-front, all the tabs, as well as the stomacher of the original bodies have been double bound – meaning that it was first bound with a thicker strip of the same silk used for the outer fabric, and then bound again with ribbon. This was done in order to prevent the boning from creating a hole and poking through the bottom of the bodies when worn.[2] 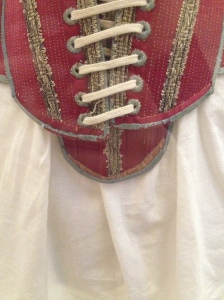 To make this binding I took a rectangular piece of the silk taffeta attached it to the stomacher in a manner similar to the ribbon binding: I placed the raw edge of the binding near the raw edge of the tabs, backstitched it down and then folded the silk over both raw edges and then felled the pressed side of the silk binding using a whip stitch onto the wrong side. Afterwards I then added the ribbon binding over the top.

The Filmer bodies also contain gores between the first, second and third tabs. To make these gores I cut four pieces of linen and 4 pieces of silk to size, backstitched the side seams, turned it right sides out and then bound the bottom with ribbon. I then whip stitched the gores to the inside of the tabs.

After binding the bodies the last step was to create the eyelet holes – all 42 of them. To do this I first measured where the holes should be and then I took a tailor’s awl (which is similar to a bodkin) and created  a hole in between the fibres of the material. I then used two sizes of knitting needles – 4mm to widen the holes until they were the desired size. After the hole was made I whipped stitched around it until all the raw edges were concealed. To see this process in more detail see my post about how I did it on the effigy bodies here. 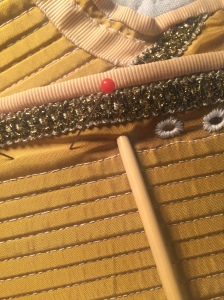 After the eyelet holes were complete and the shoulder straps secured, all I had left to do was to lace the bodies together with straight lacing. 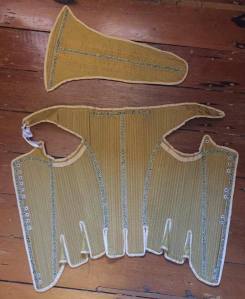 I’ll be unveiling the finished bodies and my afterthoughts on the construction process in my next blog post so stay tuned!

My Tweets
All content © copyright of Sarah A Bendall, unless otherwise linked or stated. --- All views presented are my own.