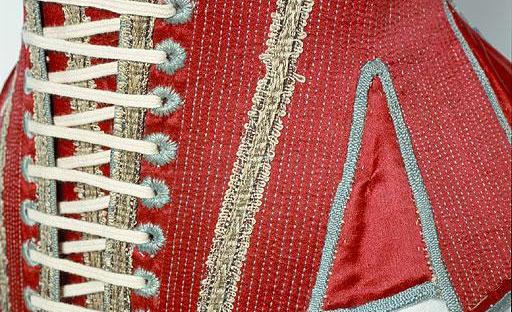 The second ‘bodies’ reconstruction that I’m undertaking for my PhD research is of the Dame Filmer Bodies at the Gallery of Costume, Platt Hall, Manchester Art Gallery.[1] The exact dating of these bodies is disputed. The museum has dated them according to their provenance: they are believed to have belonged to Dame Elizabeth Filmer, and they have a letter ‘E’ near the shoulder of the garment. Dame Elizabeth Filmer died in August 1638 and so a reasonable date range for these bodies of 1620-1640 has been given by the Museum.

Yet in Luca Costigliolo’s examination of the garment he states that the “long-waisted style” of the bodies is more characteristic of the 1650s, than of the higher waisted styles of the 1630s and 1640s, and subsequently has given the date range 1638-1650.[2] I’m more inclined to side with Costigliolo, but regardless these are an amazing and rare example of foundational undergarments from the first half of the seventeenth century.

At the moment there is no available pattern for these bodies, although I’m hoping that there will be one in the upcoming Patterns of Fashion 5. When I was in the UK last year, I did not have a chance to examine these bodies in detail as they were on display. I did, however, get to look at them closely from different angles through the display glass and there is quite a lot of detailed curatorial/conservation notes on the garment on the Gallery of Costume website.

So how did I draft a pattern?

There are two pictures of these bodies lying flat, one in Norah Waugh’s The Cut of Women’s Clothes, 1600-1930, and the other in Jenny Tiramani and Susan North’s Seventeenth-Century Women’s Dress Patterns: Book Two. On the Gallery of Costume website there are also some measurements for the bodies. So by scaling up the pictures that I have with the measurements given, I was able to draft my own pattern for these bodies. Of course the nature of bodies, being boned, means that they may not have been laying completely flat in those pictures, however, after making a mock up I feel fairly confident that my pattern is accurate in shape and size to the original.

The Filmer bodies consist of four separate parts: two front sections and two back sections. These bodies lace together at the front with nineteen pairs of eyelet holes, but unlike the effigy bodies, they have a separate stomacher over which the lacing sits. The stomacher in these bodies is fully boned, and I can’t be sure, but there does appear to be a busk made from a thicker piece of whalebone or wood in the centre of the stomacher as well. The shoulder straps fasten the same way as the Effigy Bodies at the front, but these straps sit more on the edge of the shoulders keeping in fashion with the off-the-shoulder fashions of the late 1620s onward. There are six tabs at the bottom of the bodies that spread over the hips, and between the first and second tab on either side of the front, a gore made from silk and linen has been added.

These bodies are made from a crimson silk satin with a linen twill lining, and are bound with a pale blue silk ribbon. The bodies are stitched all over in blue silk thread, stiffened with whalebone and are trimmed with a metal thread braid.[3]

For my reconstruction, I decided to use a linen for the lining and yellow gold silk taffeta for the outside. Queen Henrietta Maria’s wardrobe accounts from the same period contain entries for both silk taffeta and silk satin bodies, and one of the bodies in these entries was yellow. Many portraits of the Queen from the period also depict her in yellow silks, so I tried to find a shade of yellow similar to those gowns she was depicted in.

The widths of the whalebone channels in this style are incredibly tiny and much smaller than the both the effigy bodies and another bodie that is contemporary to this. For both my effigy reconstruction and this one, I chose to use a modern plastic dressmaking boning and plastic cable ties, as both of these mimic baleen’s properties. Unfortunately, there is no way that I would be able to cut these down to the same width as the original, so each boning channel will be 6mm wide to accommodate this 5mm boning. These are the same channel widths as found on the 1603 effigy bodies, so although not completely accurate for this particular reconstruction they are accurate for the period.

The original bodies are decorated with a metal braid trim, and I was lucky enough to find this very similar metallic gold and silver braid at my local sewing supplies store. 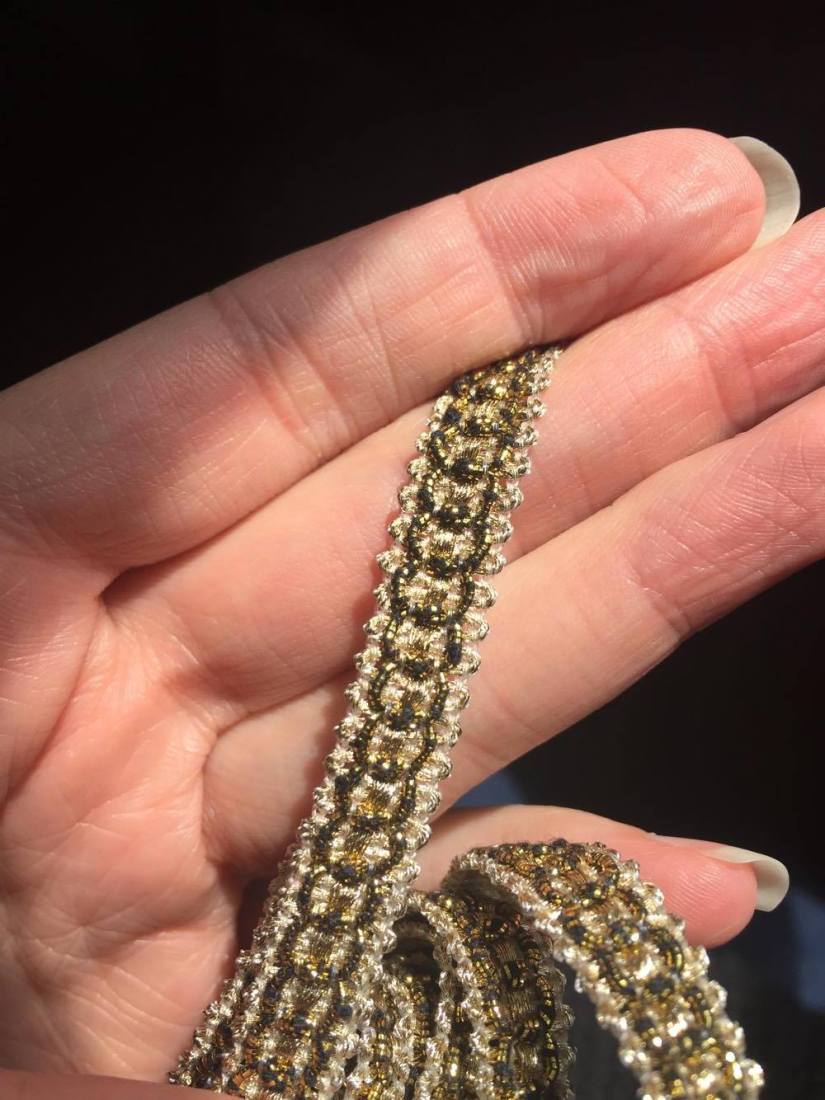 [1] In the museum catalogue these are called ‘stays’, however, I prefer to use the term bodies as this is what they were called at the time they were made and worn. The term stays does not come into being until the late seventeenth century.

View all posts by SB