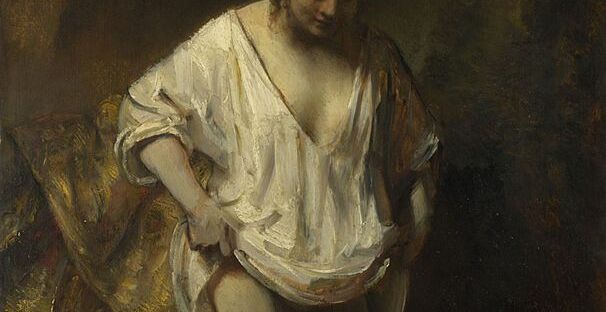 As many of you know, during my PhD I decided to reconstruct four items of female structural dress from the sixteenth and seventeenth centuries. However, in order for the reconstructions to be worn during photoshoots the most basic female undergarment of the the early modern period was needed: the smock.

The Smock – A Brief History

Smocks or shifts (‘chemise’ in French) were the most basic undergarment of all women and men (men’s were referred to usually as shirts) in sixteenth-century Europe. Indeed they had been the base layer of dress for hundreds of years and would remain so, in one form or another, until the twentieth century. During the early modern period they were made from linen, sometimes silk, and later cotton, and sat closest to the historical body. Smocks and shirts were worn underneath every type of clothing, and as a result even the poorest person owned a few smocks, and rich elites often owned dozens.

Throughout the seventeenth century various styles of smocks and shifts developed – from those that were intricately embroidered such as the one below, to those that had elaborate frills around the cuffs and neckline. Interestingly, it was these frills that would eventually turn into a separate accessory in the second half of the sixteenth century – the ruff.

Smocks and shirts served two main purposes during the sixteenth century. During the early modern period outer garments, especially those made from luxurious fabrics such as silks and velvets, were rarely laundered in order to maintain the condition of the fabric. It was the smock then that absorbed sweat and other body excretions, and it was this item that was regularly cleaned and laundered instead.

Medical theory during this period also viewed the skin as porous and weak and the hot water from public baths or full immersion bathing was believed to create openings for disease such as plague to slip through.  Linen, as a porous fabric, therefore replaced the role of skin in bathing practices, as it was believed to absorb dangerous matter that could then be laundered and removed away from the body.   Thus, instead of cleaning the skin one would simply remove and clean their ‘second skin’ – their smock.[1]

Cleanliness by the seventeenth century therefore was not focused on the body of skin and flesh, but measured by the cleanliness of linen and the display of objects and garments in external appearance.[2] Kathleen M. Brown has noted that “a clean linen shirt, complete with ruffs and lace at the neck and wrists, indicated not only the wearer’s refinement, attention to fashion, and wealth, but his access to the services of a laundress”, and his attention to cleanliness.[3] Therefore the whiteness of smocks and shifts, rather than the body itself, was linked to cleanliness during this period.[4]

This idea is probably best exhibited through the following instance: at one point yellow linens became so popular in London during the early seventeenth century that critics were quick to associate them with the uncleanliness of the Spanish courtiers who used saffron dye as a way to deter vermin, and with the neglected hygiene of those Europeans in hot climates whose sweat and lack of access to laundering turned the colour of their white shifts to yellow.[5]

All smocks during the sixteenth and early seventeenth century (and beyond) were similar in construction, they were made from a collection of basic geometric shapes: rectangles, squares and triangles. These pieces were cut from standards lengths of linen. Although regional differences could exist. Smocks and shirts were usually sewn in the home by women, or female seamstresses were employed.

Smocks also changed in style throughout the early modern period in England depending on the styles of outer clothing worn. Necklines could be high such as on the smock above, or fashionable bodices and gowns that had necklines cut horizontally off the shoulder during the mid-seventeenth century would have required smocks that also had this scooped neckline (such as in the Rembrandt below). Unfortunately, very few seventeenth century English women’s smocks survive in museum collections. So it is hard to establish a chronology of styles during this period.

The pattern I used for my smock came from Ninya Mikhaila and Jane Malcolm-Davies’ wonderful book, The Tudor Tailor. As the title indicates, the smock pattern provided only date until the end of Elizabethan era. However, Jacobean fashions were similar enough that this style would work for this era as well.

The book provides patterns for two types of women’s smocks, and five types of men’s shirts. I decided that in order to get the most use of my smock that I would make option g) a “smock with simple hemmed neck and sleeve.” So no fancy period specific neck or wrist cuff, or embroidery. However, the neckline is very similar to the neckline of the smock that Mary Queen of Scots supposedly wore to her execution in 1587 which is now held by the National Trust.

This style of smock would have been worn with a court style of gown that required a low neckline, such as the French gown.

Because the basic shape of the smock contains no curved lines (except the neckline), the pattern was easy to scale up onto my chosen pattern paper (which is actually the inexpensive baking/parchment paper from the baking aisle).  I decided to use a lightweight white linen that I already had in my supplies. It is not as fine as the Holland linen that would have been used by wealthier people during the sixteenth and seventeenth centuries but it does the trick.

I didn’t want to spend a lot of time of my smock, and as it’s not actually one of my reconstructions there was no need for it to be hand sewn. As a result, the smock was easily and quickly put together. Again, as this is not one of my reconstructions, I decided not to use period specific construction techniques in regards to hemming and seams (as it would take too long) – so I just did those the same way I would do on a modern garment I was constructing. The only difficulty I had with the smock was sewing the gussets under arms as this is quite an historical sewing technique that is rarely used in modern clothing. However, after reading some information on gussets they went together well. 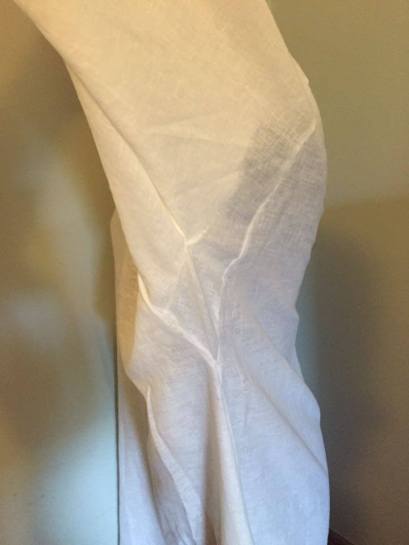 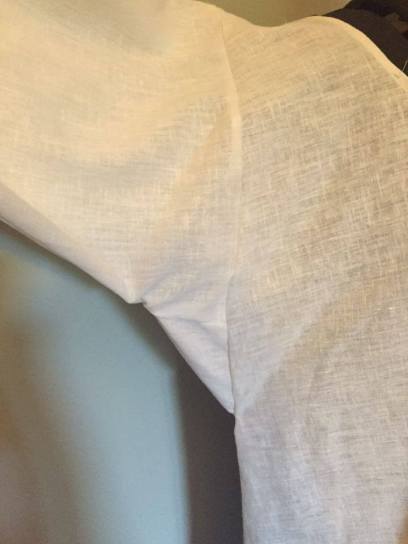 The primary reason I made this smock was for my models to wear it underneath the reconstructions that completed as part of PhD (bodies and farthingales). The garment looked fantastic on them and I’m really pleased with how it photographed, and it ended up working for both an Elizabethan pair of bodies and an off-the shoulder civil war-era pair too! 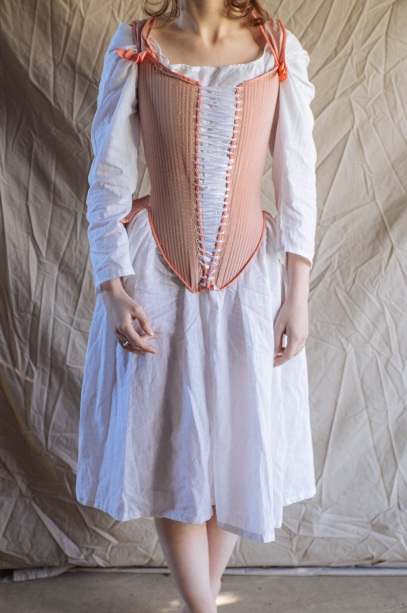 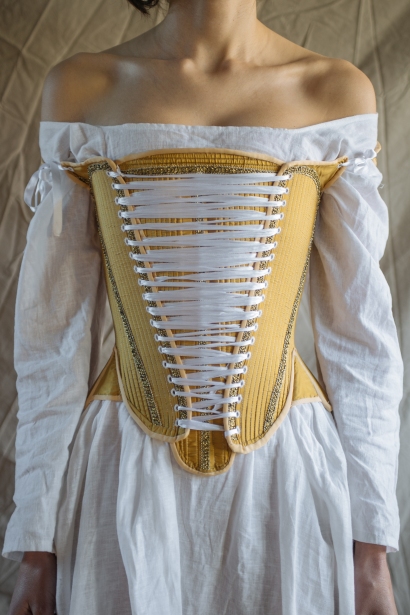 I’m also pleased with how it sat underneath my Jacobean gown that has a low cut doublet bodice. 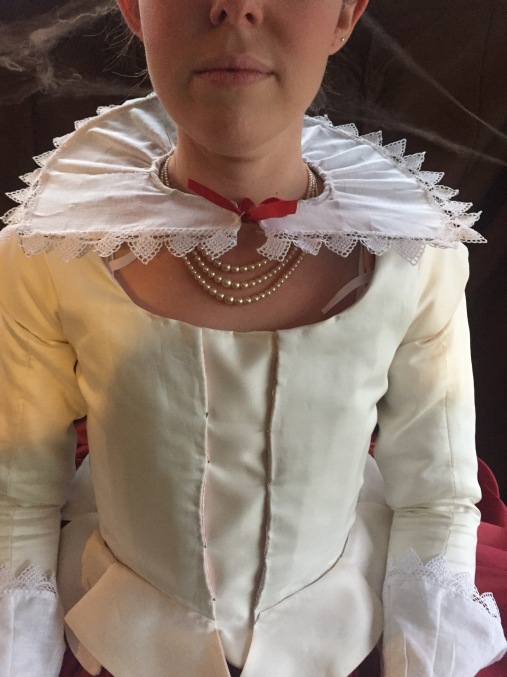 So all in all, I think this is an excellent pattern, that, while not strictly historically accurate for these eras, is also suitable for most Stuart dress too.

For further reading on the linen smock, see the footnotes below:

[1] Georges Vigarello has explored this idea of the ‘second skin’ in his work on hygiene in France. See:  Georges Vigarello, Concepts of Cleanliness: Changing Attitudes in France since the Middle Ages (Cambridge: Cambridge University Press, 2008), p. 54.

All content © copyright of Sarah A Bendall, unless otherwise linked or stated. --- All views presented are my own.